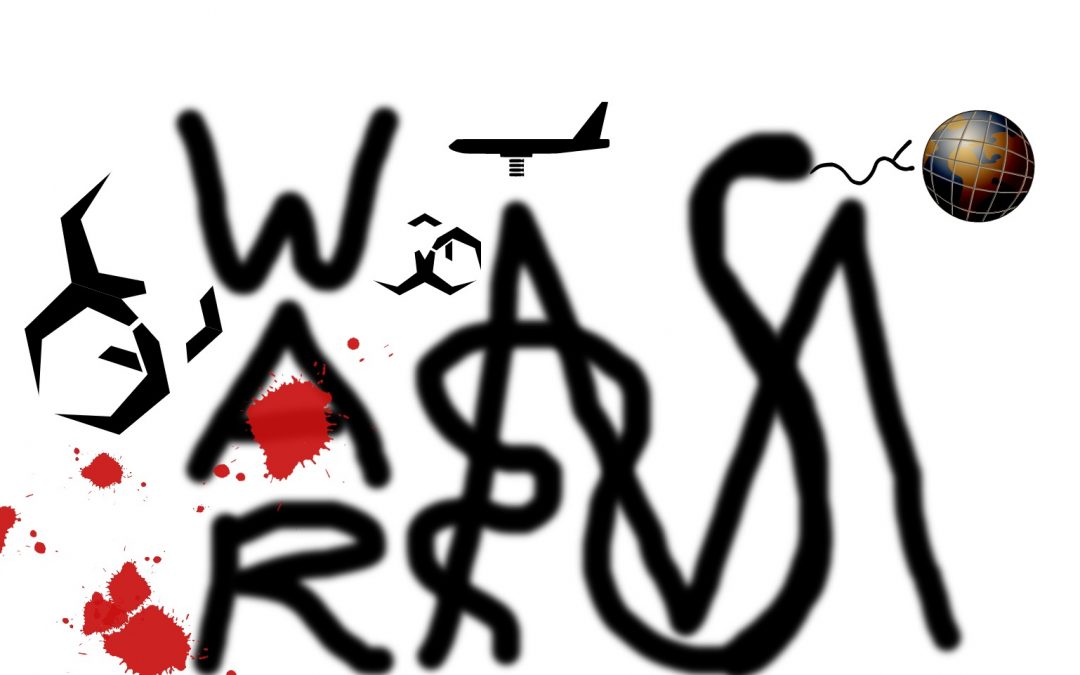 This art piece was created by an artist from Eastern Europe who is working under the pseudonym NINA VALS. The piece will be for sale as an NFT on Opensea platform under “IMAY” account.

The piece arrives like the thunderous sound of a war drum. It draws you immediately to
the vertically written spray paint and quickly onto the snake that swirls around what could be a
letter M. The piece also demands attention towards the splattered red dots. Between the plane
dropping bombs, the futuristic yet somehow timeless pincer traps, and the globe being the focus
of the serpent’s tongue, we are immersed in a dangerous landscape where war is totally
present. It is violent, relentless, wide-ranging.

There is also potentially a deeply tragic theme. It is safe to assume the spray paint in
this image is a metaphor for walls, buildings, and brick that are often as surfaces for spray paint
in the physical real world. We can then understand that the red splattered images are blood,
and also fit into this metaphorical world. Tragically, the spray point perhaps warns of a literal
‘top-down’ war, along with a snake ready to consume whatever is in its’ path.
Perhaps even, the letter ‘M’, is not a letter at all, but rather a structure for which the
wide-open mouth snake uses to prop itself up for battle. The snake, therefore, becomes a symbol
of a consuming slithering war. The tragedy comes to a full stop then with overhead bombs
dropped onto our metaphorical physical real world.

By noting the various image mediums, the piece reveals access to its’ meta-level. The
plane is not a drawing but a computer image. The image of the airplane, produced by a
computer drops bombs onto the physical real-world below and thus draws human blood. The
machines and their images leave us cold but full of mighty fear. Through this mixed media, the
idea of war is displayed for the viewer and experienced by the viewer. The piece has drawn our
blood. The spray paint writings W-A-R were on the wall, and yet the bombs dropped anyway.
Blood spilled anyway. The warnings of people were there, and yet it could not stop the
bloodshed. Our bloodshed. Finally, the snake’s tongue meeting the globe is where the physical
world meets the reality, that is the global industrial-military complex.

Alternatively, the piece is not acute in that it prevents multiple interpretations. In a
dystopic way, the spray paint may not be a warning sign at all. Perhaps it is just another layer of
the war machine, meant to instill fear. What evil would this be? What evil would prepare its’
victims with symbols of hungry snakes and spellings of W-A-R? Does it feel like today?
Futuristic?Like the past? How far into fiction are we traveling or does this feel more local?
Perhaps the piece is warning to us like how a war progresses through symbols, writings, public displays of support or opposition, and then the inevitable invasion, bombings, and blood.

Regardless of how you see the piece subjectively, on an objective level, it does not waste
time building threads for the sake of it and is open to many thoughts, feelings, and observations.
The piece does not focus on many ideas but rather layers of one idea. It arranges its
images in a way that on the surface may appear abstract, but leaves the viewer able to draw
their own conclusions. It is confident in its’ own identity and does not buckle under observation.
This piece’s meta-level is foundational and strong. Displaying writing on the wall through a
sadly modern truth about the many facets, results, and chaotic nature W-A-R possesses, the art
piece draws you in and allows you to deeply consider its’ troubling gravitational subject matter.